The Sleep Sensei is a device I created to help people fall asleep faster using calming breathing training. It’s for people who have trouble falling asleep, due to insomnia or an active mind at bedtime.

I ended up posting the Sleep Sensei on Kickstarter and had a successful campaign.

You can read more about the Sleep Sensei here: www.getsleepsensei.com

This post is the story of the Sleep Sensei and how it came to be.

This whole project started because I have trouble falling asleep at night. I was looking at potential solutions and came across a smartphone app that produced a pattern of light to follow with your breathing as you try to fall asleep. The main problem with this is that the phone screen is so dim that you can’t see it without having your eyes open! This seemed counter-productive to sleep, so I sought a better way. 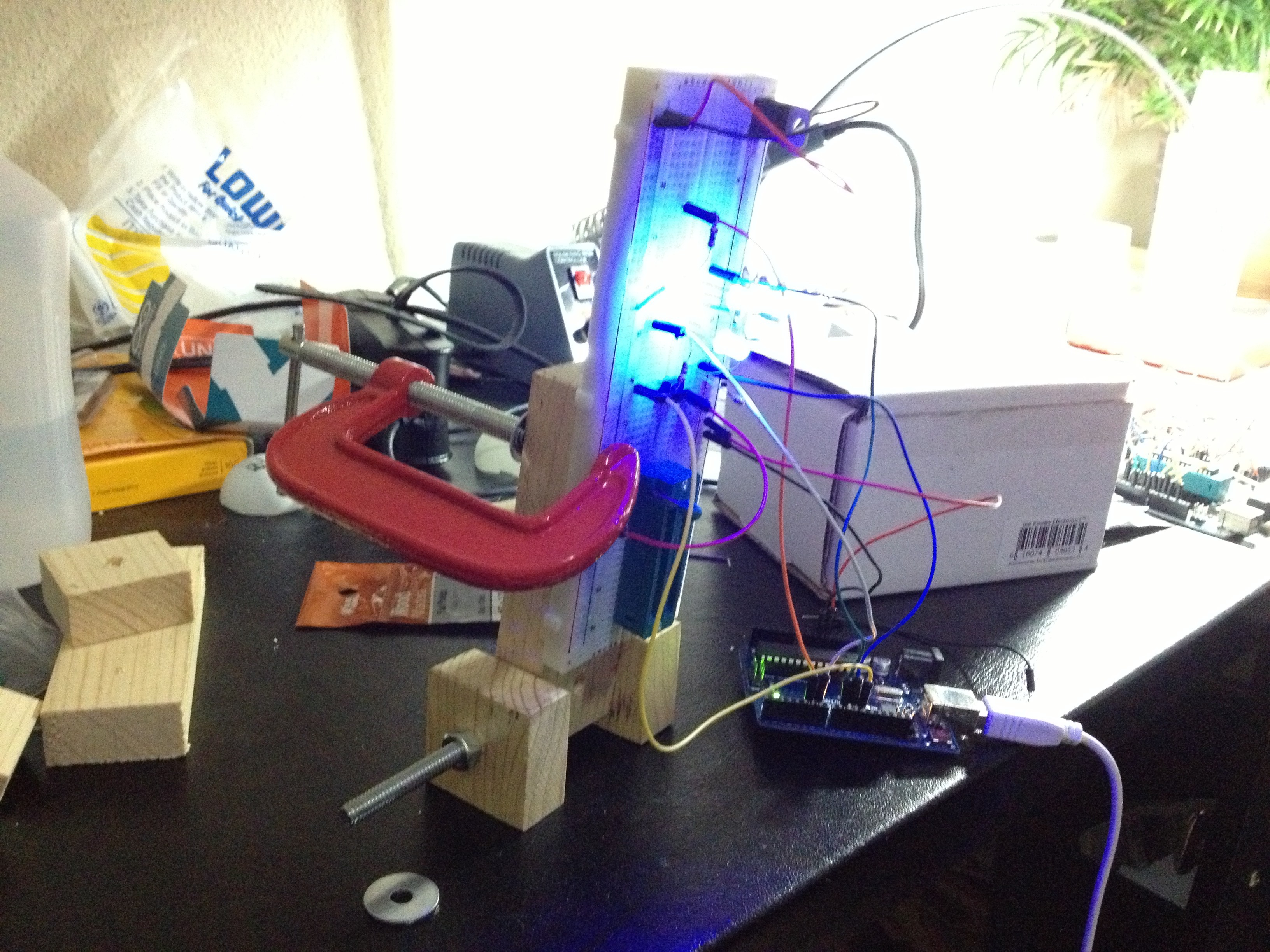 This is the very first prototype of the Sleep Sensei. It consisted of a breadboard with 4 blue LEDs performing a simple brightening and dimming cycle. I chose blue LEDs since the smartphone app I used performed a similar feat, and it used blue light. This was before I began researching the effects of various colors of light on sleep quality, so I didn’t really know any better.

The breadboard was clamped onto a wooden base with a pivot to allow me to aim the light towards my eyes. The idea was that the light from 4 LEDs directed towards my eyes would be bright enough to be seen with my eyes closed through my eyelds. And it worked!

More prototyping, and the Kickstarter design

I liked the idea of the Sleep Sensei enough to acid-etch a circuit board for what I breadboarded. I drilled 4 (very rough) holes into my wooden base so that the LEDs would shine through, and had my first standalone prototype! 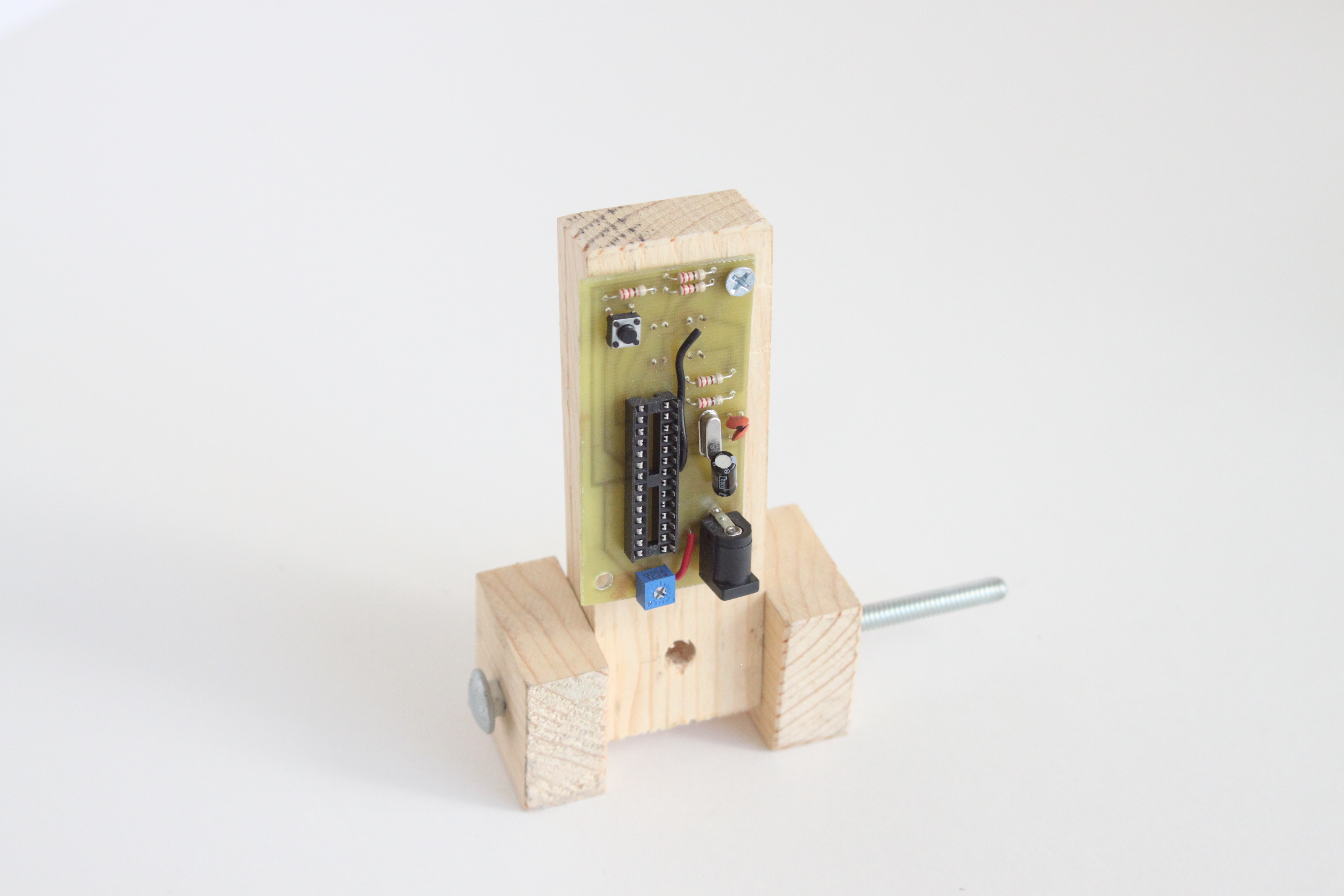 This prototype used an ATMega328, and it has a standard potentiometer to adjust the brightness. The button would allow you to switch between 4 durations of sleep coaching.

I ended up enjoying using my standalone prototype so much that I wanted to try to make more of these little guys to try on friends and family. I figured if it helped me fall asleep faster, it could help others as well. So I did some research and found out that I could program an ATtiny85 (much cheaper than the ATMega328) using Arduino, and whipped up a breadboard with all the necessary connections. 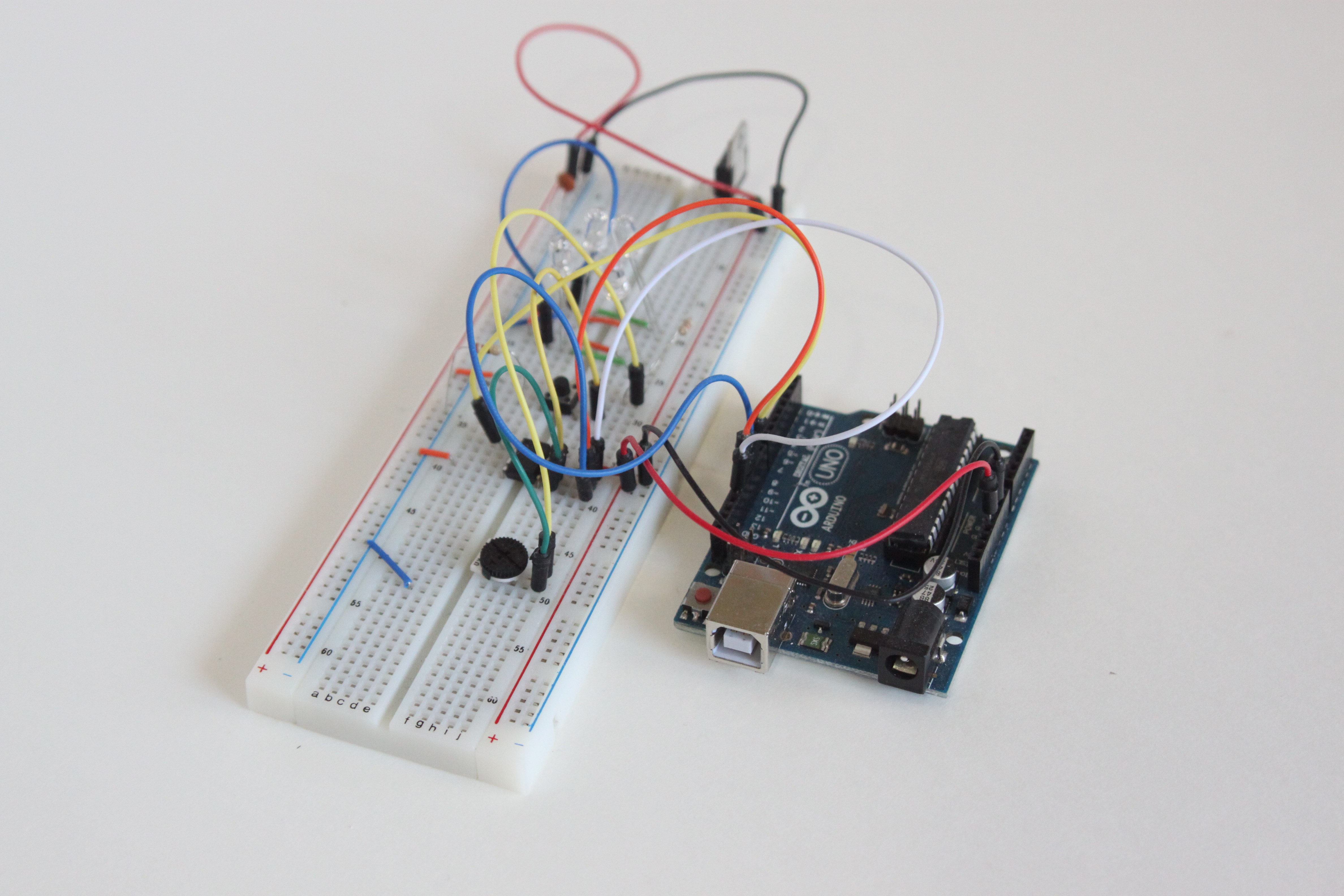 A challenge I had was timing, since the ATtiny85 was running at 8 MHz compared to the ATMega328’s 16 MHz. So I had to add a couple multiplication factors in the code to have the breathing pattern match what I had tuned on the ATMega-based design.

I then designed and acid-etched a new circuit board designed for the ATtiny85. I also found some nice thumb-wheel potentiometers on eBay which would allow for adjustment of the brightness without a tiny screwdriver. Here is what the prototype looked like: 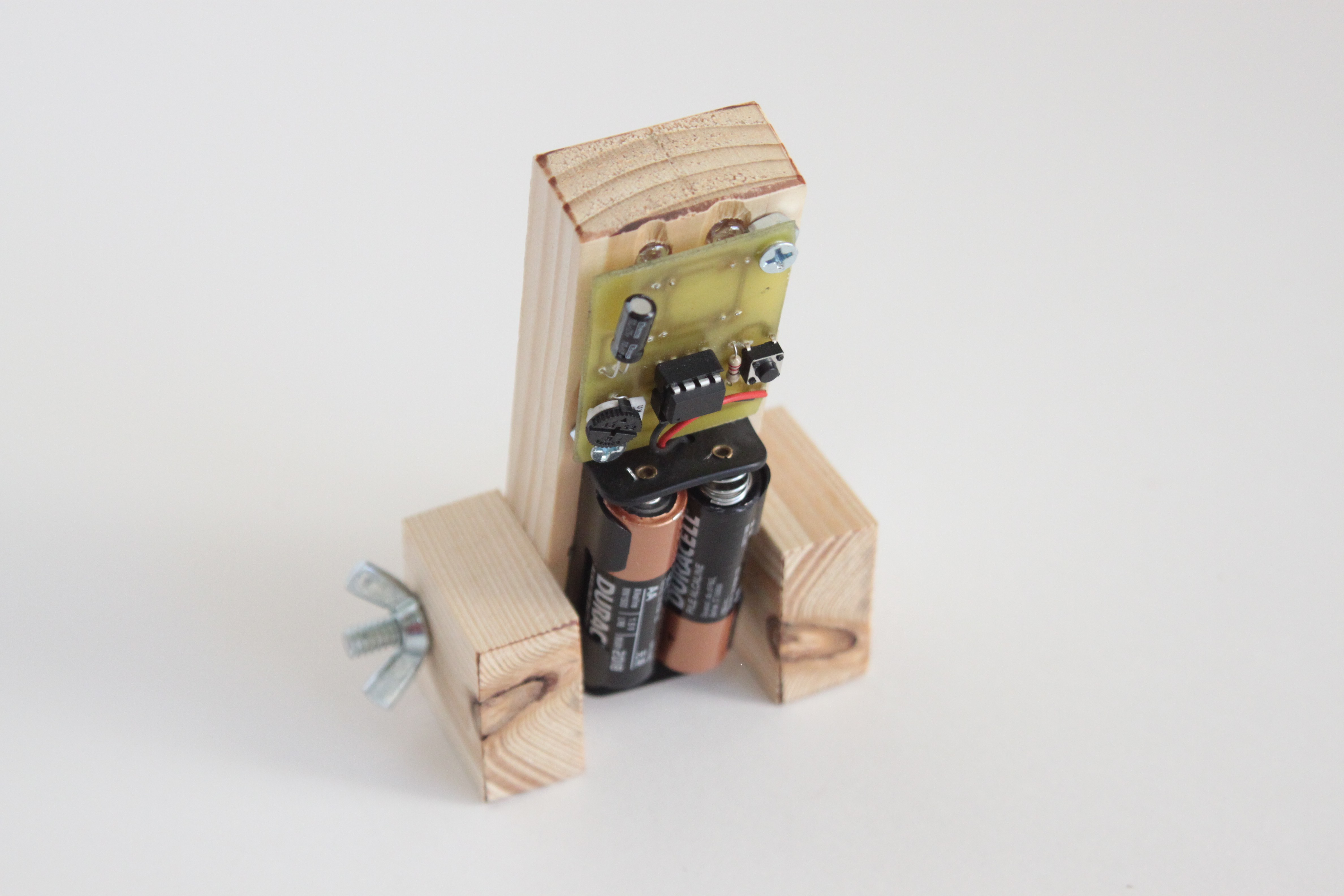 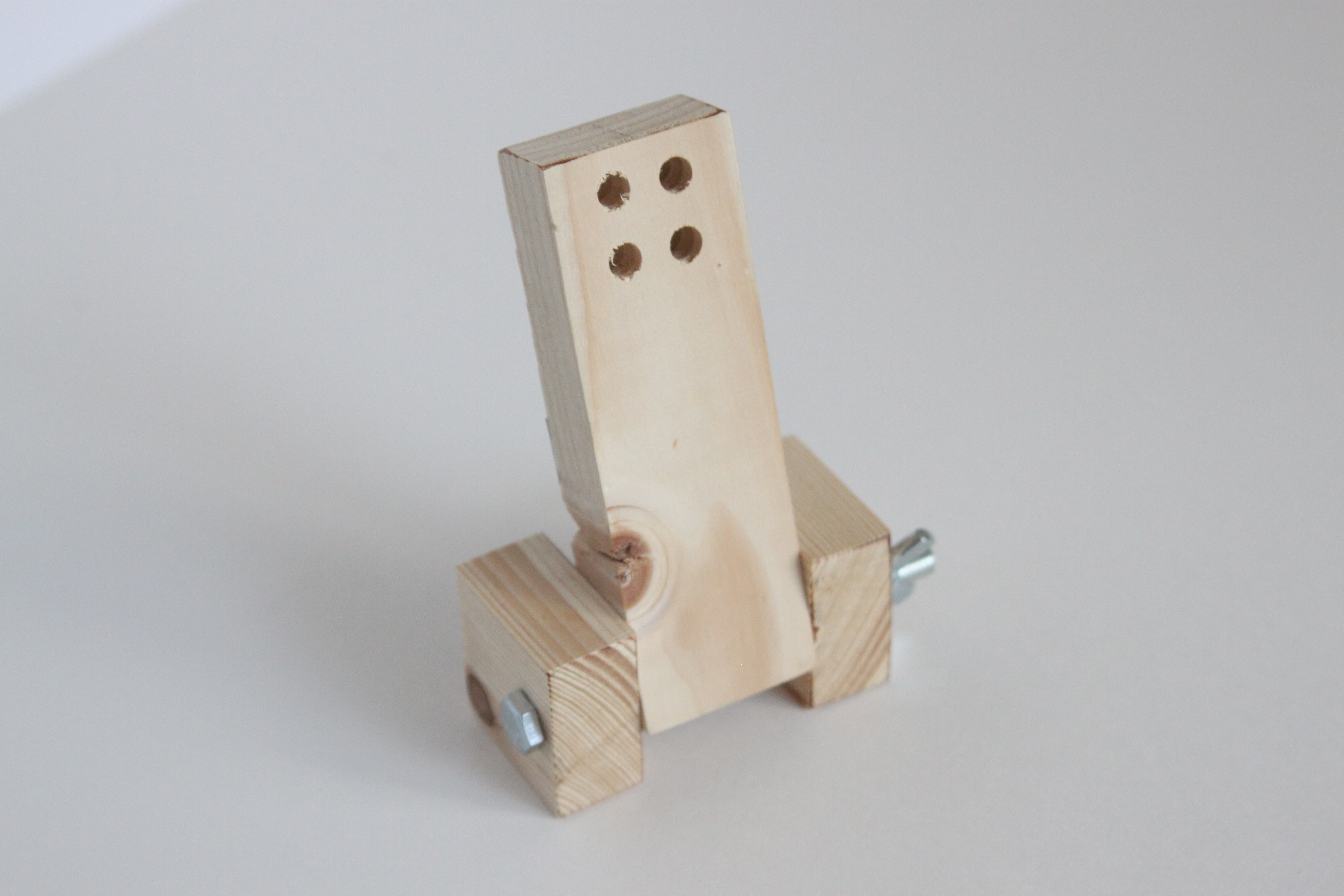 I used this guy for a few weeks, and it was actually pleasant to use. This time I had red LEDs (since I had done some research), and a nice compact circuit board that wouldn’t be too expensive to have professionally made. So that’s what I did: 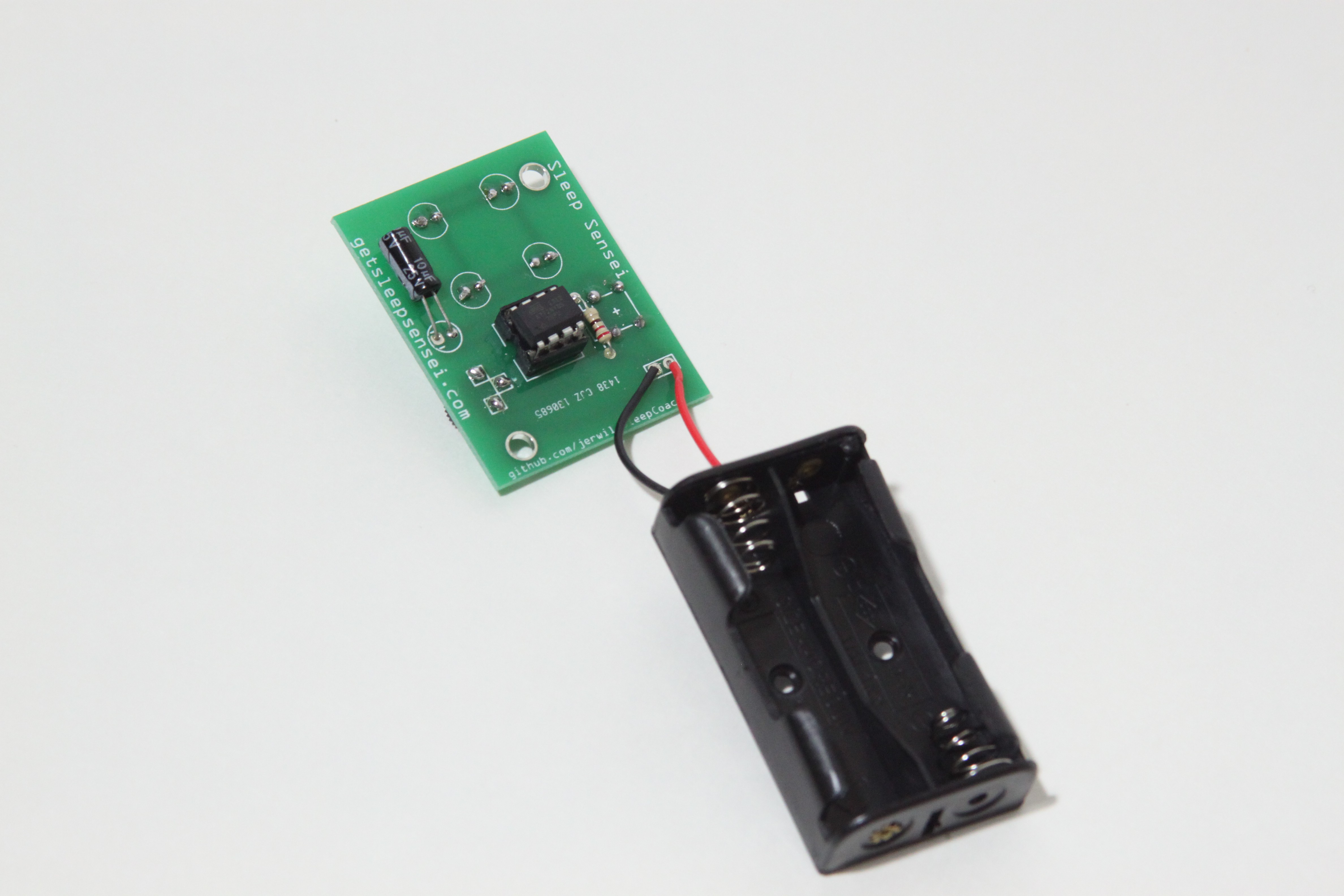 I wanted to test the product out in the wild and get feedback, so I came up with a (terrible) logo for the Sleep Sensei and made a small army of them! 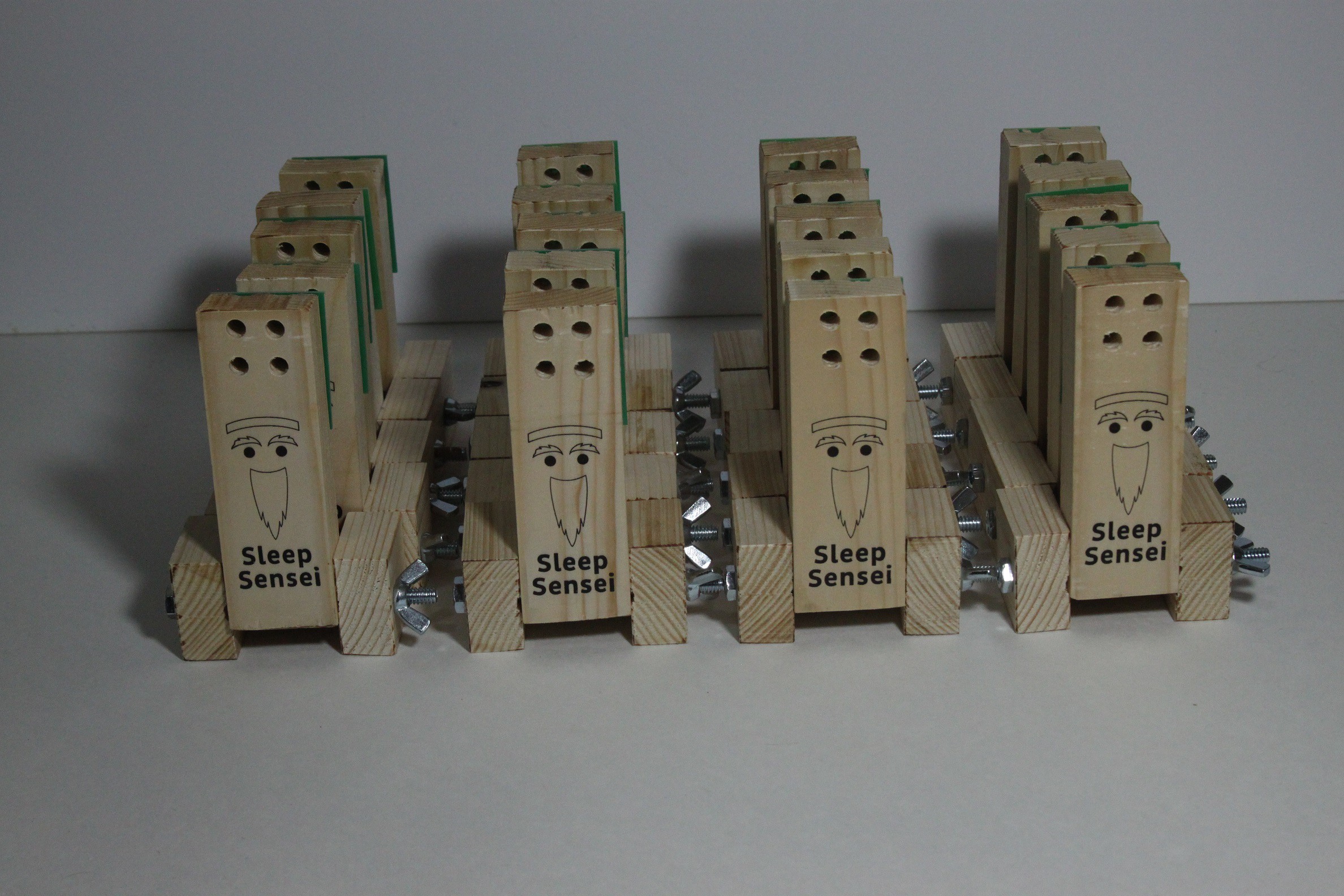 At first, I gave my prototypes to a handful of friends for their feedback. They responded with things like “it seems to work” or “I think it might be helping.” Although it was great to get positive feedback, I wanted results that were a little more scientific. So I came up with a study of sorts.

I ended up sending out 20 Sleep Senseis, and I got decent data from 5 users. Here is a plot of the average time it took these users to fall asleep before and after using the Sleep Sensei: 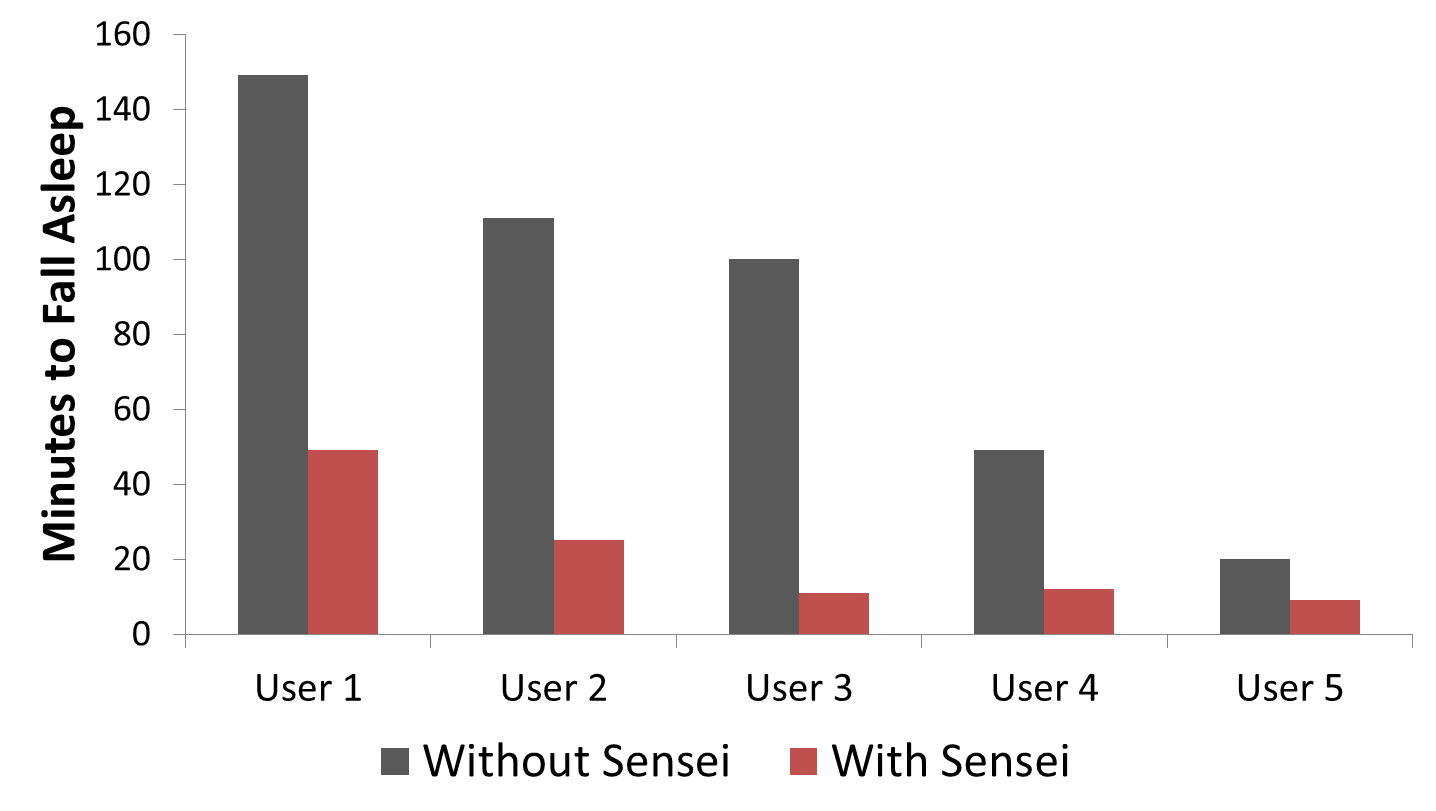 I have a detailed breakdown of each user’s data here.

Here is some of the feedback I got from the users:

“I think the quality of sleep has been improving, and I think that’s the Sleep Sensei. When I start having issues again I pull it out and it does help” – Alice S, TX

“I was really impressed with the [Sleep Sensei]- it cut the amount of time it took me to fall asleep by about half … I basically don’t have insomnia anymore and it feels that way” Marijke S, MA

“The [Sleep Sensei] allows me to fall asleep in at least under 30 minutes, sometimes even as few as 7 minutes, which is great for me! I would definitely recommend this device to anyone who is on the search for something new to help them fall asleep, someone who perhaps has tried every other sleep aid without finding anything that truly helps yet. The Sleep Sensei is awesome!” – Kate B, GA

“I’ve noticed a HUGE decrease in how long it takes me to fall asleep which has been wonderful! I really like the machine. It’s easy to use and works well.” – Kelly P, LA

Of course, this was not a clinical trial or very hard-sciency, but it gave me the confidence to try to make the Sleep Sensei into a real product by launching a Kickstarter!

With a bit of confidence under my belt, I decided that I wanted to launch a kickstarter for the Sleep Sensei to get it into more hands.

I was tired of having to make my own wooden bases by hand, so I started working on a new design that could be fabricated by a vendor. I ended up trying out a bunch of concepts, such as: 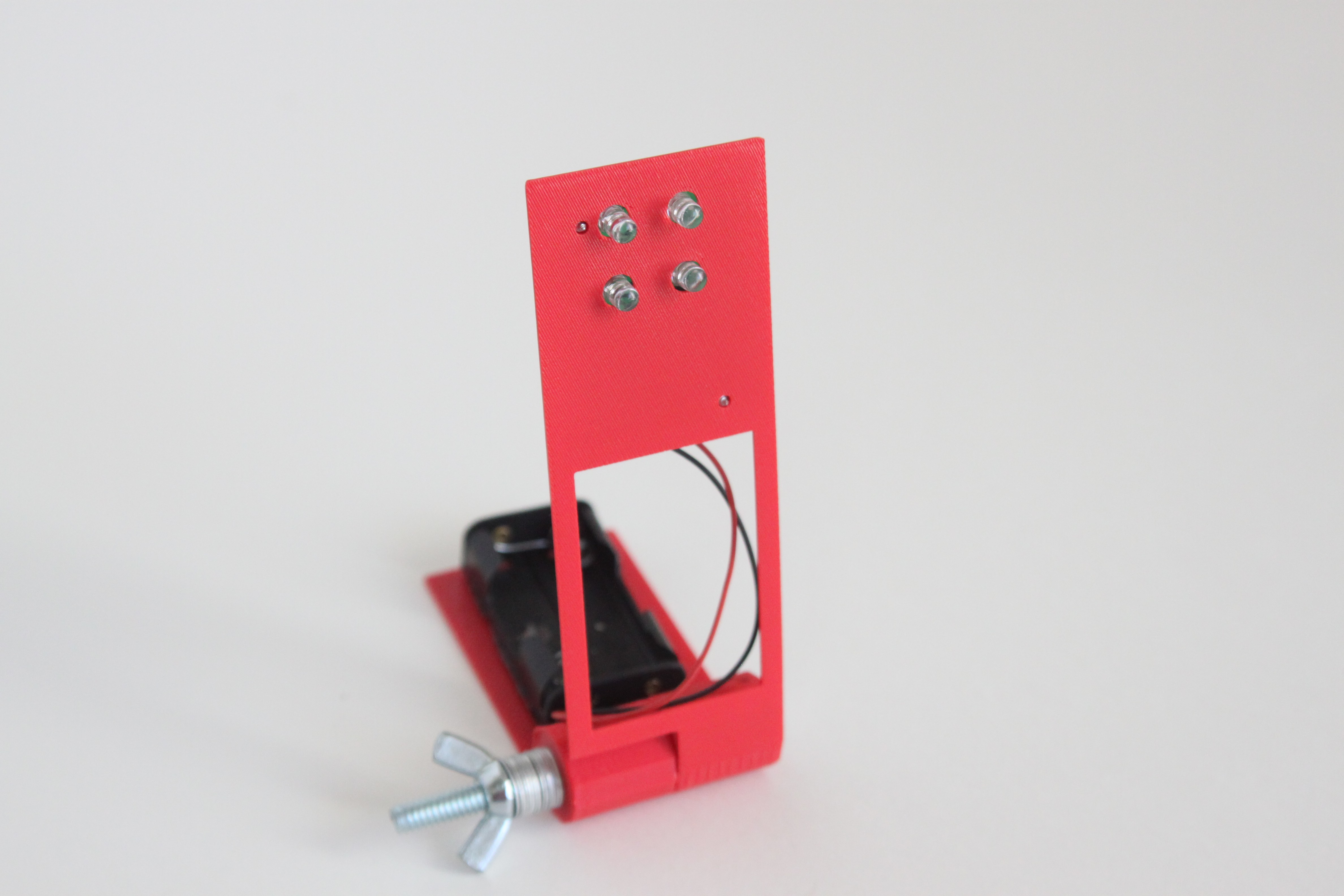 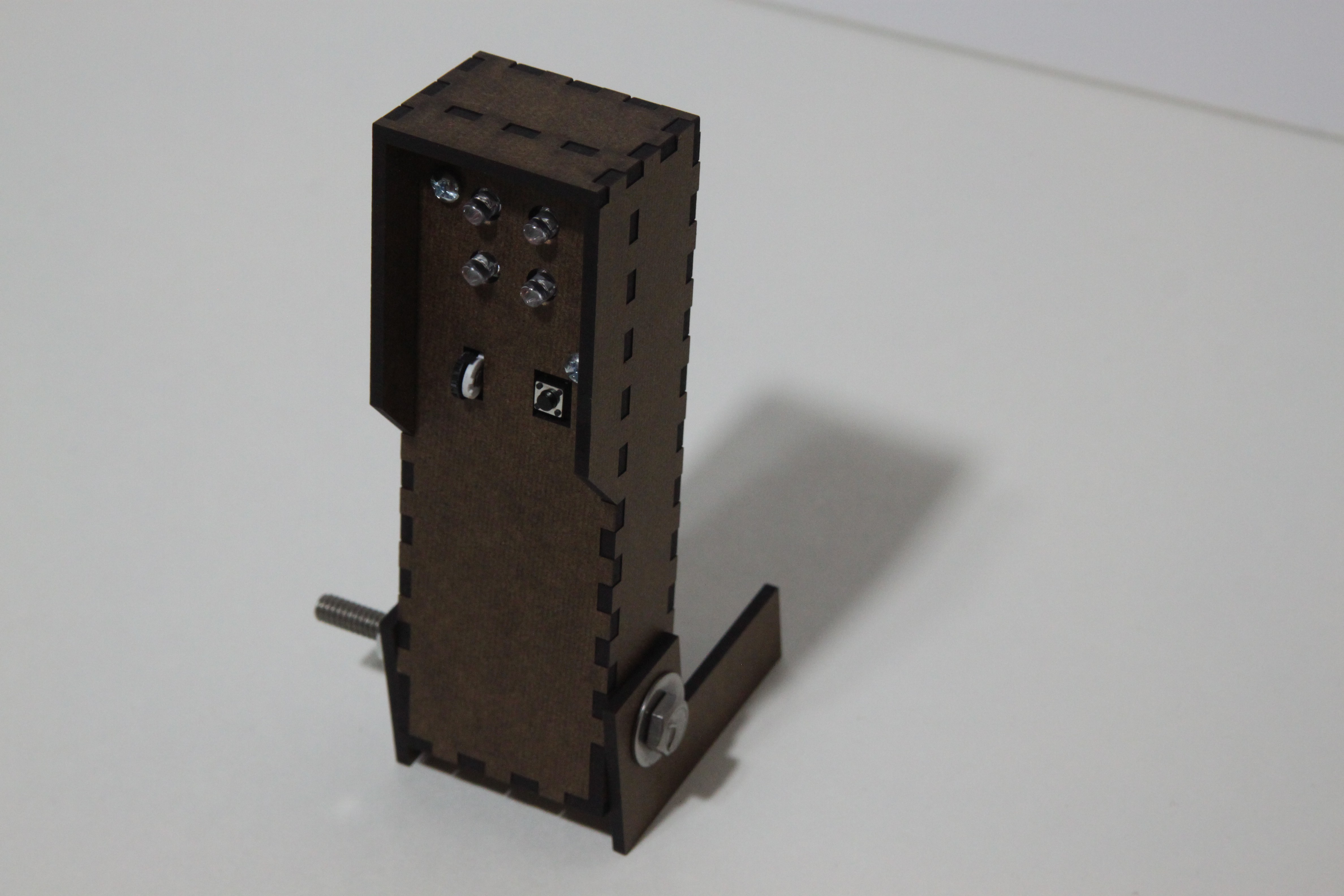 And what ended up being the winning concept, a laser-cut hinged design.

I decided to set my Kickstarter launch date as the same day as Houston Mini Maker Faire. This gave me a deadline, and I figured the Maker Faire would help me attract some backers. I made some business cards… 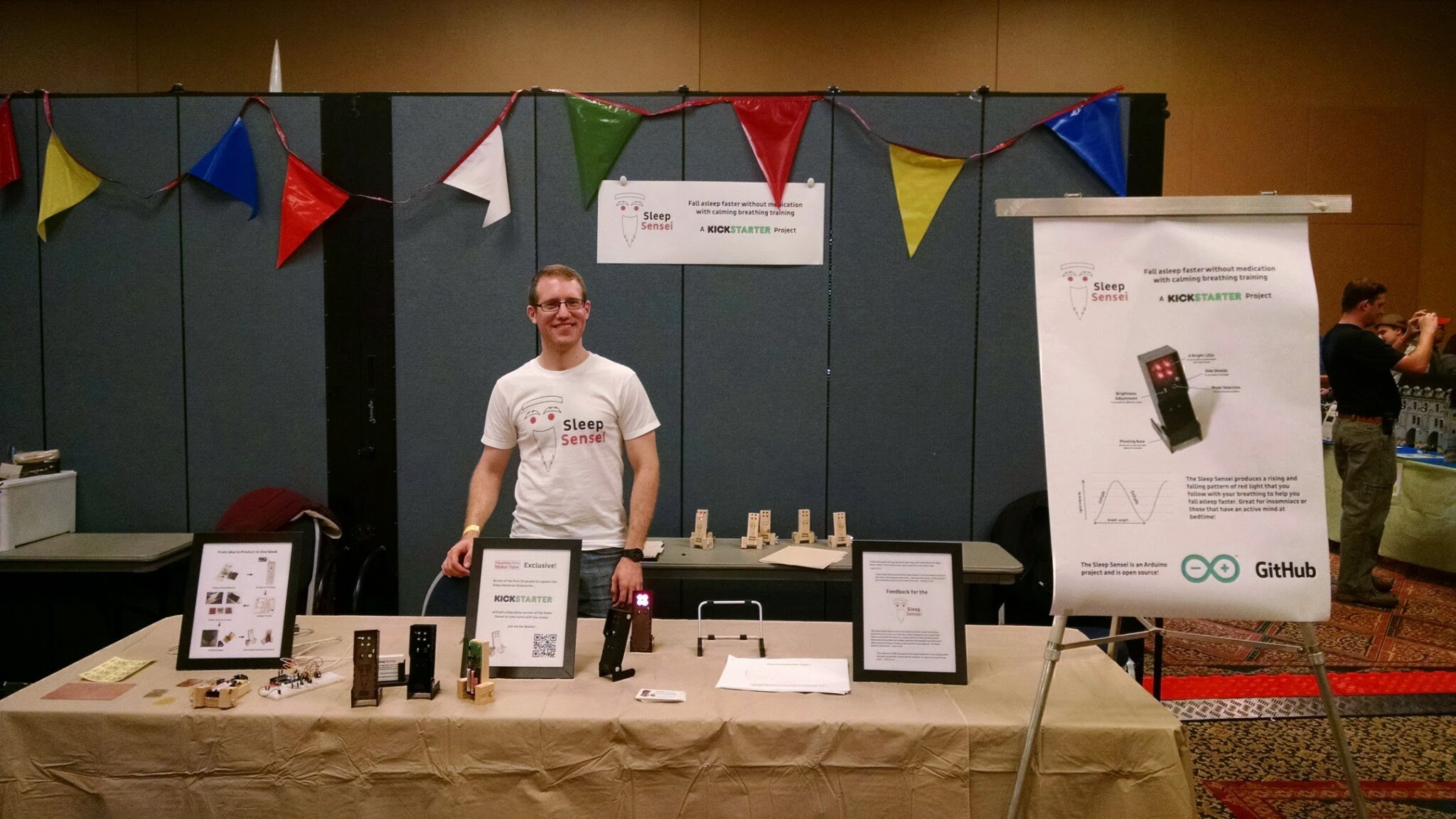 And set up a booth at the Maker Faire.

And I launched my Kickstarter page! However, it didn’t end up reaching the goal. I think several reasons factored in:

But, the failure of the first Kickstarter didn’t stop me, since Bay Area Maker Faire was just a few months away, and I had a couch to crash on in San Francisco. So I decided to improve the product and try again!

I figured that I still wouldn’t be able to get $25,000 for mass production, so I had to rethink how I would make the Sleep Sensei. I decided that if a reasonably small amount (less than 250) of Sleep Senseis were ordered, I would order the bare PCBs and solder the components myself. If quantities ordered exceeded these expectations, then the volume would be sufficient to put in a bulk order.

For example, I was quoted $8.27 per assembled PCB if only 100 were ordered, but the price went down to $3.57 each if I ordered 1000. The laser-cut bodies cost around $9 each shipped, and the mechanical components (knob, hinge) cost around $2. Adding in shipping, packaging, taxes, and Kickstarter fees, and the Sleep Sensei would sell at a loss at low quantities if I didn’t fabricate the boards myself!

For the second Kickstarter, I wanted to have a finished improved design for the Sleep Sensei. One bit of feedback I heard from several people was that the default breathing pattern wasn’t right for them. Some complained the breathing rate was too slow, while others couldn’t keep up.

So, I wanted to allow the user to customize all aspects of the breathing pace: how long the breaths are at the start and end of the coaching session, and how long the session lasts. I had to rethink the design, since I wouldn’t be able to add all this functionality with just a button and a potentiometer. So, I switched up the design and opted for a rotary encoder with a built-in button. 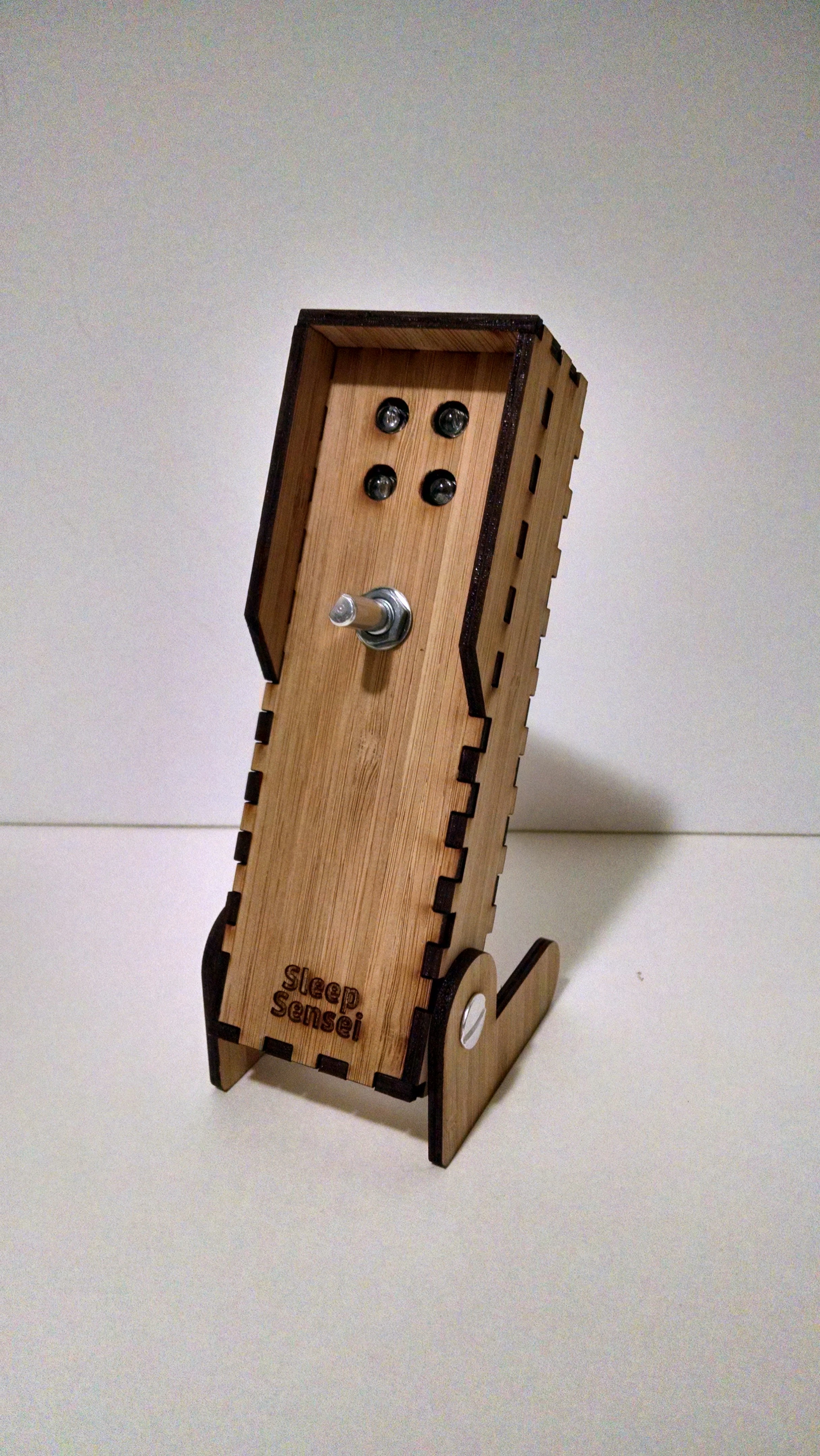 This gave me 3 forms of digital input: two directions of the knob and a button press. With this, I modified the code to include “menus” the user could activate in order to change the settings, and I made someinstructional videos to clarify how the process is done.

I also stared making the Sleep Sensei out of bamboo, since I liked the look and found the price to be comparable to using plastic.

I also knew I needed a new logo and Kickstarter video. My girlfriend pitched in and came up with a sketch for a logo that I really liked: 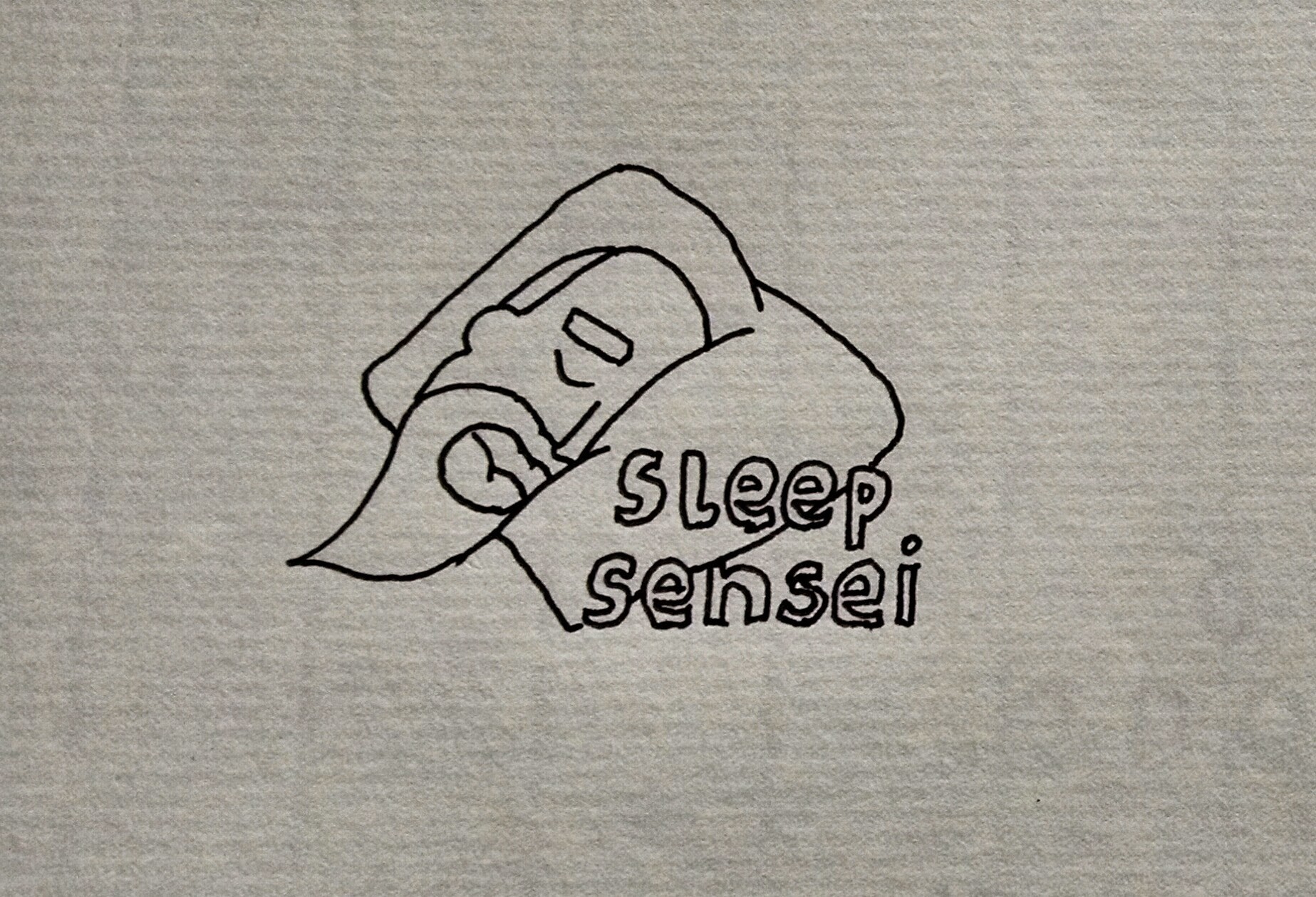 I sent this over to a logo designer I found on Fiverr, and voila! 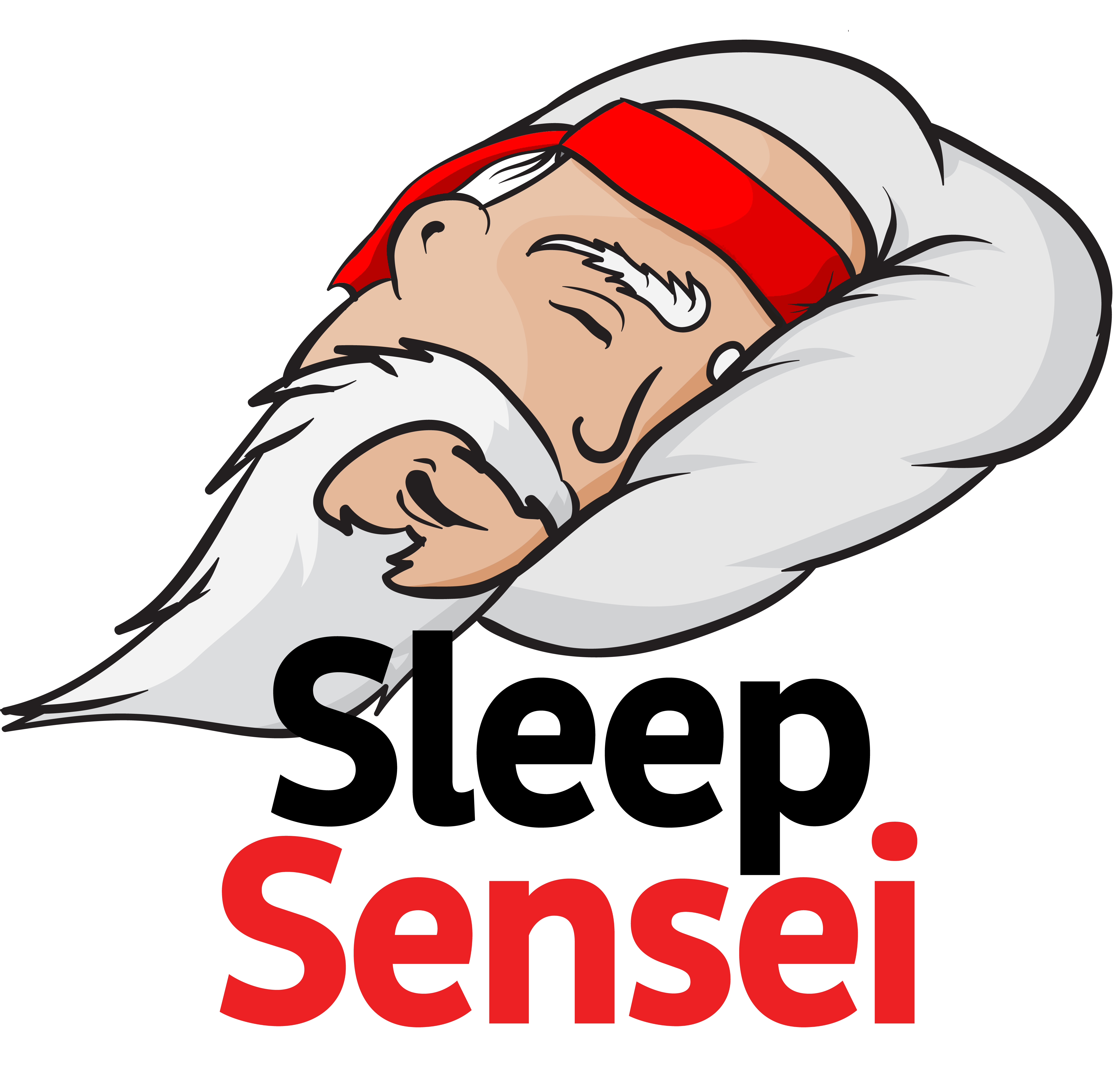 My girlfriend also helped me shoot the new video, with directing and writing help (and use of her Mac for some much-needed premium editing software).

I also found a reasonably priced professional product photographer on Fiverr, and had some nice shots of the Sleep Sensei taken. All in all, I wanted the new campaign to be more polished and professional, all while staying on a shoestring budget.

This time, I wanted to be more proactive with the marketing of the Sleep Sensei, so I contacted Ponoko, the laser-cutting shop that produces the Sleep Sensei shell, and told them about the new Kickstarter. They were quite interested and ended up interviewing me and writing a post about it.

I also paid a couple of organizations that claim they will get you a bunch of backers through social media, but I did not get a single new backer as a result of their facebook posts and tweets. This seemed mainly because they sell the same service to hundreds of others, so your product is just one in a sea of many posts each day. 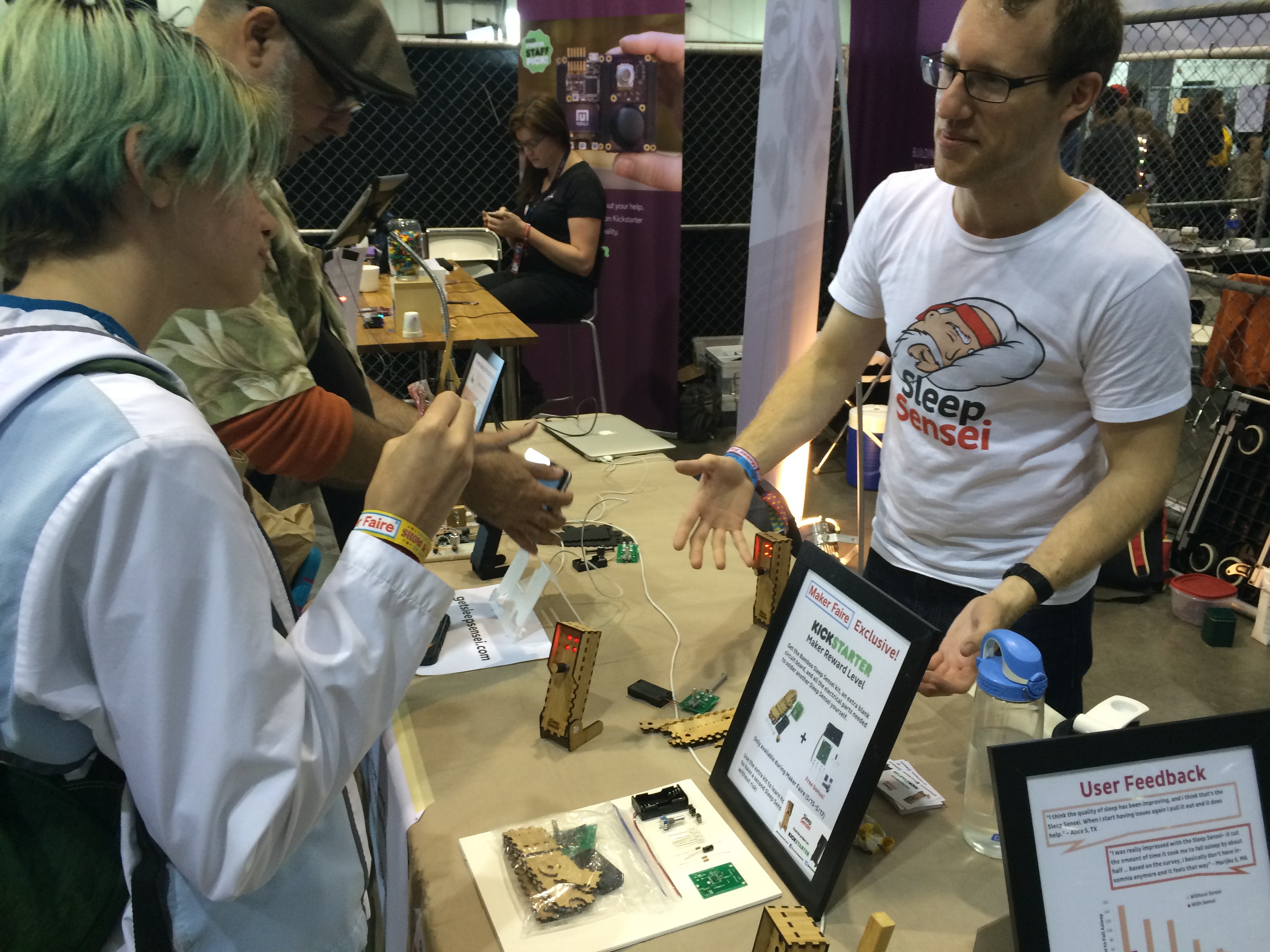 In the end, the Maker Faire ended up being the most valuable form of marketing, since I was able to show people the product and have them try it out in person. Most of my backers ended up coming out of the Bay Area, and I can assume that most of those backers were visitors to my Maker Faire booth.

Once the Kickstarter was funded, I ordered all the things: 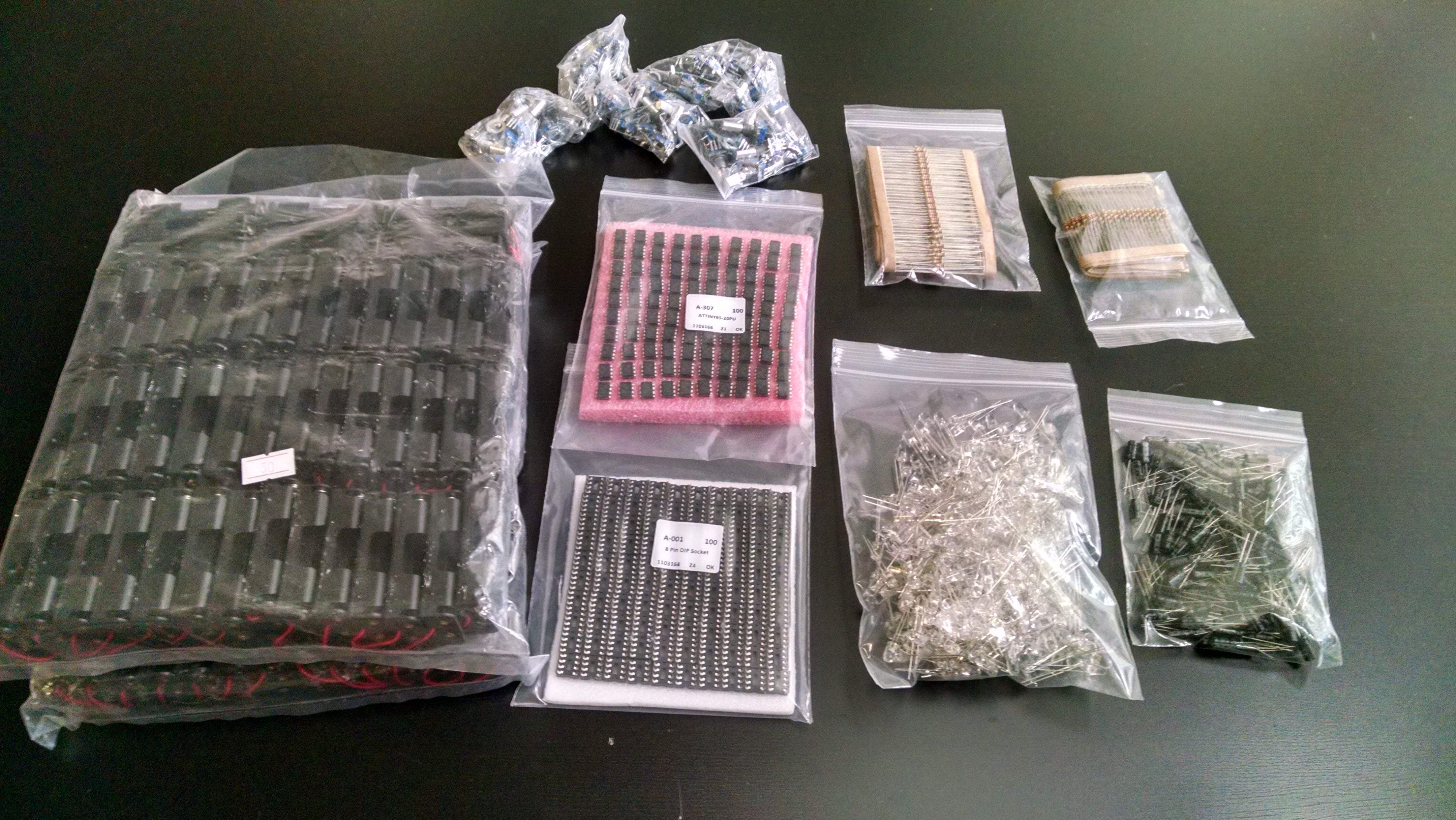 And got to work assembling the PCBs by hand: 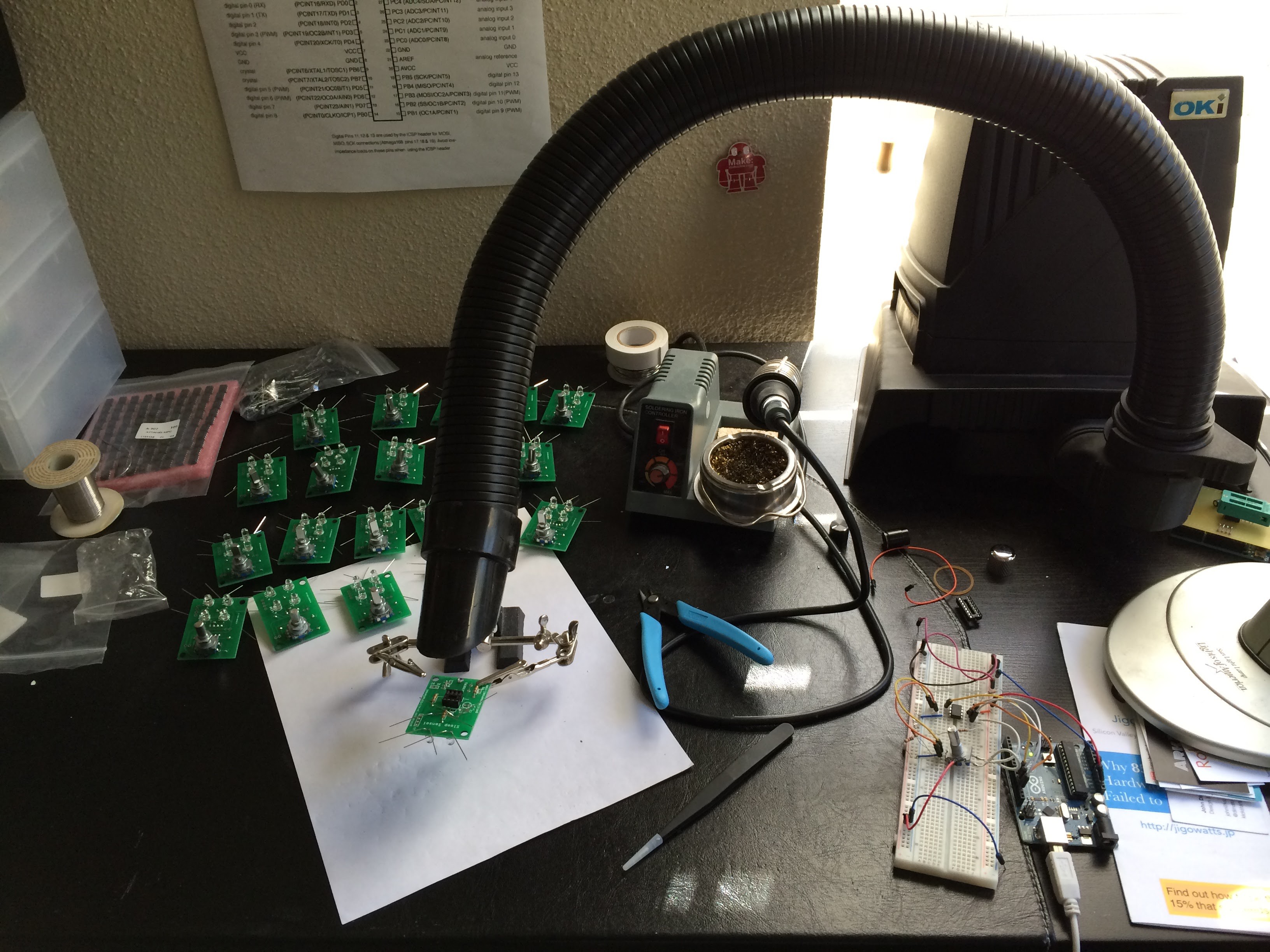 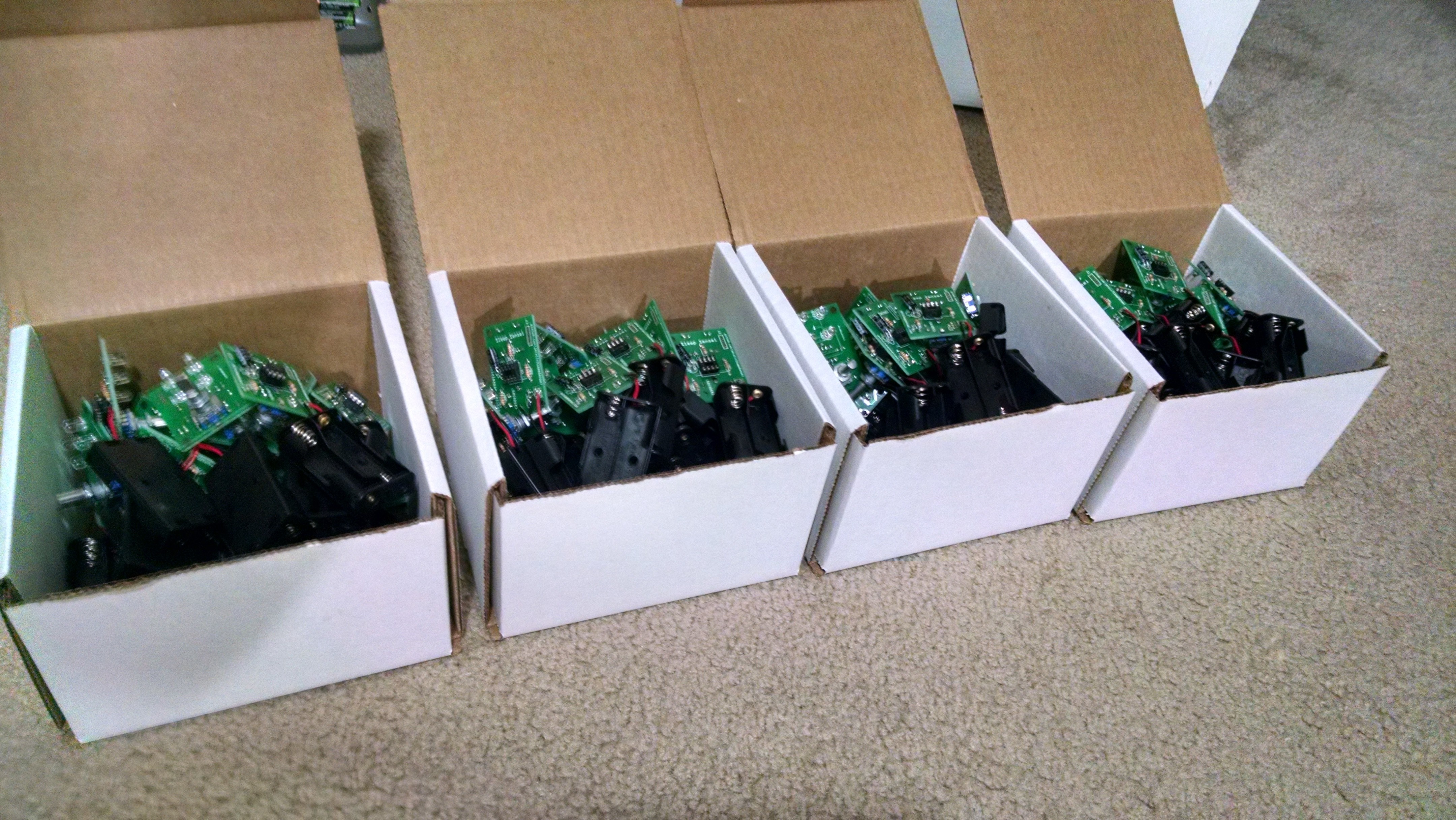 With my girlfriend’s help, we got all the lasercut components organized and ready to pack: 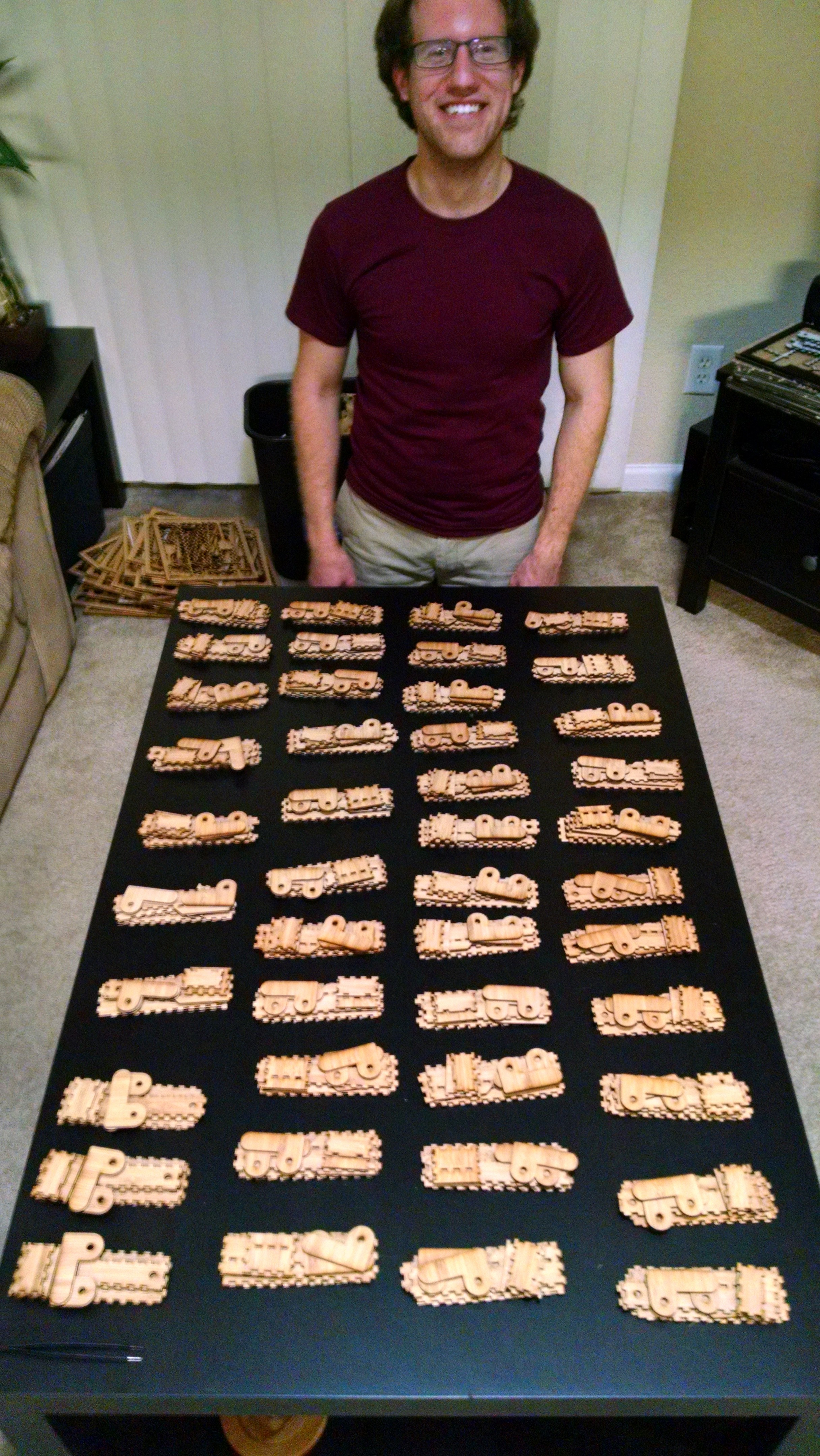 After a few weeks of assembling, packing, and shipping, all the Kickstarter rewards were out! I then did some research for a place to sell the Sleep Sensei going forward, and created a Tindie store.

Conclusion – You can’t do it alone

All in all, making the Sleep Sensei was a valuable experience. I got outside of my comfort zone to try to be a salesman, marketer, designer, video editor, photographer, web designer, electrical engineer, and mechanical designer. And I found that it was a lot of work!

I learned that if you want to be truly successful, you can’t do it all by yourself. For my first kickstarter, I tried to do it all on my own, and failed.

But the second time around, I had help from my girlfriend (logo designer, camerawoman, and great supporter), my brother Mark (editing of Kickstarter page, test subject, and Maker Faire booth hand), and paid help such as a professional photographer, a logo designer, and a music writer (for the video). I also was boosted by Ponoko’s newsletter piece about the new Kickstarter, and family and friends helped to share the Sleep Sensei on Facebook and Twitter. I even got some board design help from an electrical engineer friend at my workplace, and his feedback helped make the board smaller and more efficient.

I’m glad I was able to turn an idea of mine into an actual product, and I learned a lot along the way. Until the next great idea strikes, I’ll keep on tinkering!